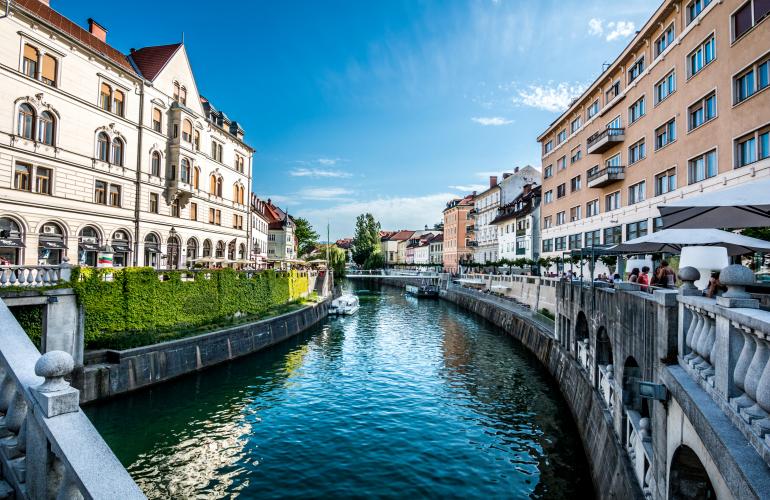 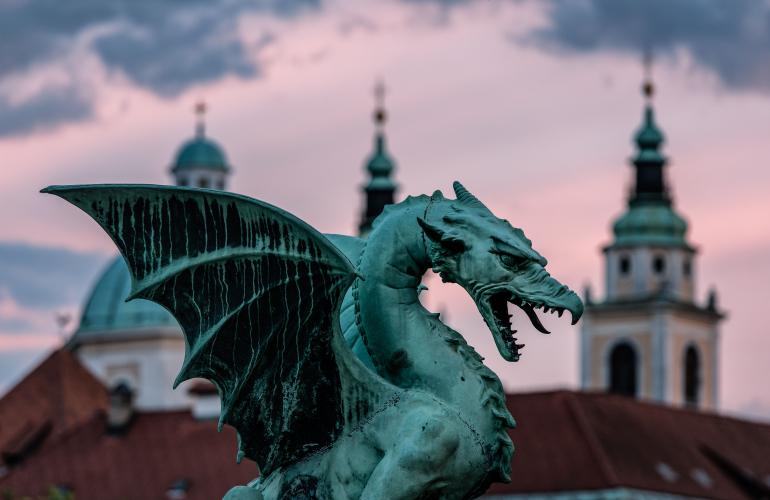 Ljubljana, the small yet charming capital of Slovenia, is a stylish city of culture, history and gastronomy, offering a blend of old charm and new cool as well as a relaxed atmosphere. With a population of 295.000, out of 2.067.000 in Slovenia, it is an easily manageable destination with vast pedestrian zones and a walking city par excellence.

In their free time, both leisure and business visitors like exploring the narrow cobbled streets in the Old Town which, together with a wider city centre area, is closed for traffic.  The welcoming atmosphere along the Ljubljanica riverbanks, with its thriving café scene, a collection of intricately crafted bridges over the river, luscious urban parks and gardens, the Baroque and Art Nouveau heritage, the architectural gems designed by the world-renowned master Jože Plečnik, and numerous other historic, gastronomic and cultural attractions harmoniously blend together into the city's image and character. Whether one is a lover of culture and art, enjoys casual city wanderings and a vivid student atmosphere, or seek culinary delights, Ljubljana has something to offer that will not fail to impress.

Both its residents and numerous visitors perceive Ljubljana as a city built on a human scale. Despite the fact that it ranks among the mid-sized European cities, it has preserved its small-town friendliness and, at the same time, it has everything that all the larger capitals have. In the winter its dreamy central European character prevails, while the summer brings out its relaxed Mediterranean feel.

Awarded the title of the European Green Capital in 2016, it also happens to be one of Europe’s greenest and most liveable capitals. 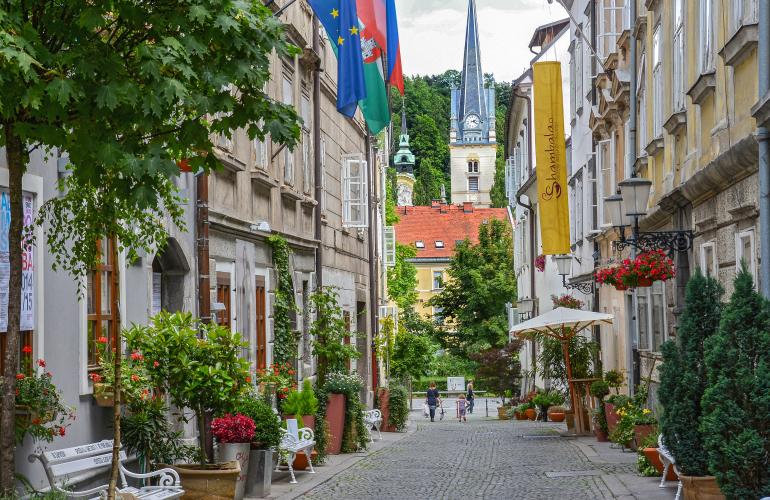 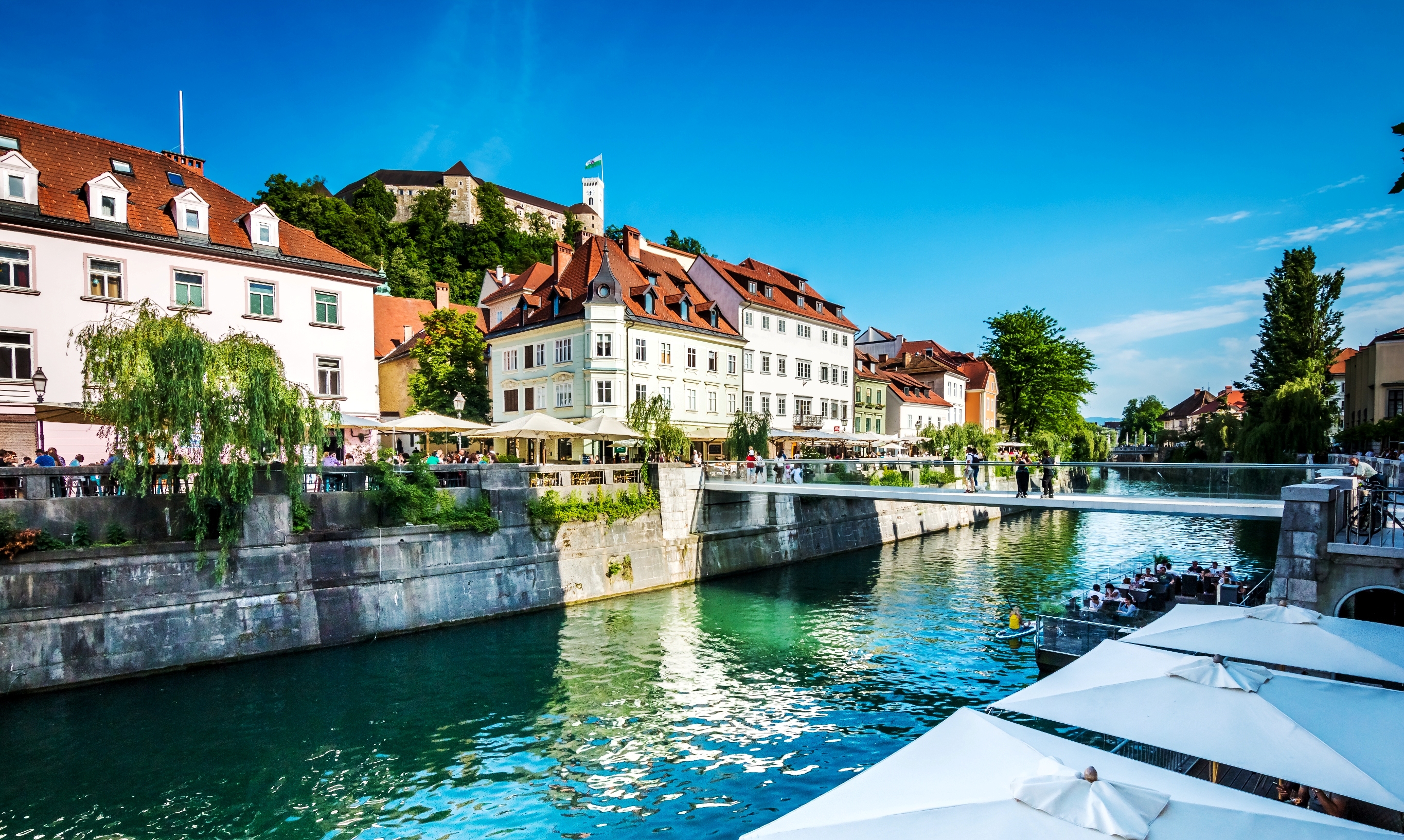 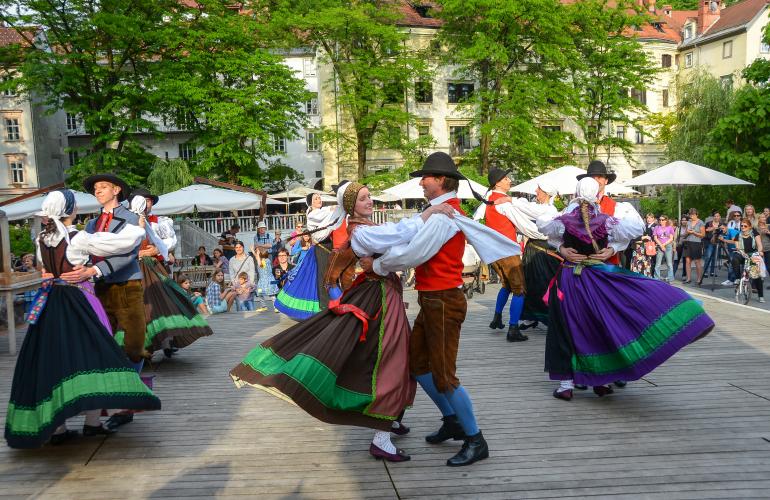 All flights to and from Ljubljana are operated through the Jože Pučnik Ljubljana Airport, which is located at 25 km from the city centre.
A new passenger terminal is currently under construction, set to welcome its first guests in June 2021, just prior to Slovenia's term of the Presidency to the EU Council, in the 2nd half of 2021.
https://www.lju-airport.si/en/travel-destinations/destinations/

From the airport, Ljubljana can be easily reached either by door-to-door shared shuttle service (10 EUR) or by taxi (approx. 40 EUR). There is also a public bus line from the airport to the Ljubljana bus station.

Further information on travelling from the airport to the city:
https://www.lju-airport.si/en/transport/ 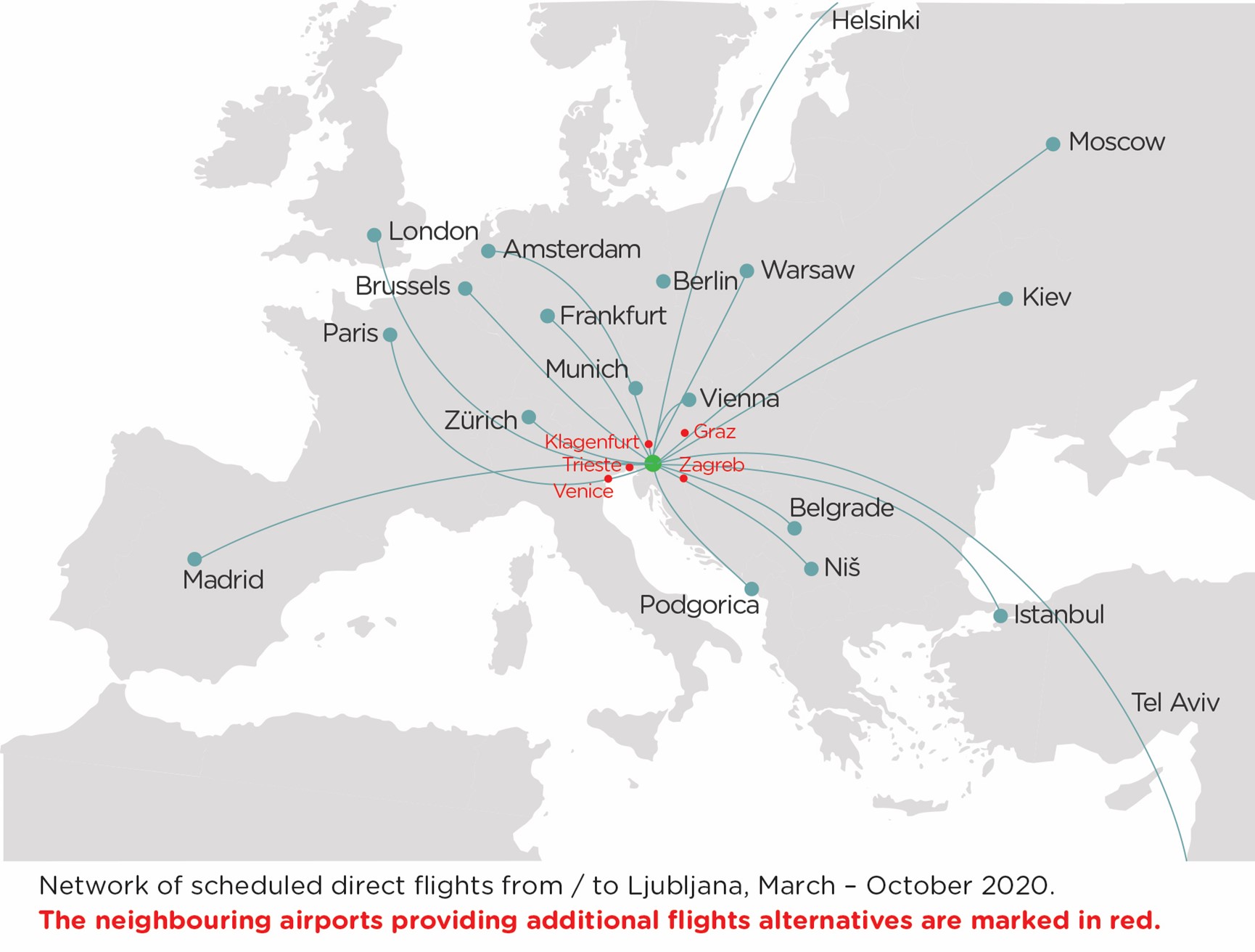 By road
Slovenia’s road network has been modernised over the past decade so as to provide an efficient road system, improve road safety and ensure wider European integration. The construction of the motorway hub is nearly completed and the access from the borders with Italy, Austria and Hungary towards Ljubljana is swift. Motorways are complemented by a good network of main roads and regional roads. The longest diagonal driving route across Slovenia can be covered within three and a half hours.
Motorway vignettes are mandatory:  www.dars.si
By car
Slovenia has a developed network of motorways:
– from Villach (Austria) E 651 (100 km)
– from Klagenfurt (Austria) E 652/E 61 (85 km)
– from Graz (Austria) via Maribor E 57/E 59 (195 km)
– from Trieste (Italy) E 61/E 70 (110 km)
– from Zagreb (Croatia) E 70 (120 km)
– from Budapest (Hungary) E 57/E 71 (430 km)
By bus
The Ljubljana Bus Station has regular services to all Slovenia’s neighbouring countries, including the Flix Bus network, as well as to the most popular tourist destinations within the country (Bled and Bohinj lakes, the coastal town of Portorož and Piran). The city public transportation network is complemented by around 30 suburban buses, which link Ljubljana to its close surroundings.  www.ap-ljubljana.si/en
By rail
Slovenia has a developed network of railways, connecting Ljubljana with major towns and tousrist destinations in the country, as well as cities in the neighbouring countries, including intercity trains to Vienna and Prague.
Ljubljana’s main train station is within an easy walk to the city centre.
The website of Slovenian Railways displays train schedules: http://www.slo-zeleznice.si/en

In cooperation with GoOpti you can travel smoothly to the conference venue, Congress Centre Cankarjev dom or to the chosen hotel in Ljubljana! In half an hour, you will reach Ljubljana from the main airport of Ljubljana. Other nearby airports are also easy to connect to via Go-Opti (1,5 hours from Trieste Airport, 2 hours from Zagreb and 2,5h from Venice Airport).
Check the best offers of low cost transfers with GoOpti. Choose between shared, private and customized transfers, either way GoOpti’s professional drivers will get you to your chosen destination relaxed and on time – 100% guaranteed!
GoOpti

Distances from the neighboring airports to Ljubljana by road:

For any further questions regarding the EFTA2022 please contact:

Thank you! Please check your email and confirm the newsletter subscription.